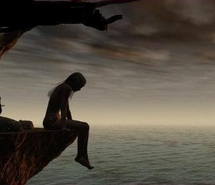 Severe emotions. Inability to face and deal with situations head on. Drinking to silence the voice that is screaming out in pain. Taking pills to numb the edges so I do not hear the sarcasm of the voice telling me that no one cares. I am sitting here right now with a lump in my throat (making it hard to enjoy my morning coffee) and this awful feeling in the pit of my stomach. For no more reason than I am facing another onslaught of memories/revelations and I am not sure that I am strong enough right now to deal with them.
Prior to being diagnosed with depression I taught myself how to blanket my mind. We all have an internal dialogue that goes on and on and on. We refer to it when we want advice that aligns with our way of thinking. Mine keeps me company and insists that I am not crazy. But I get ahead of myself. I had approximately a 45 minute drive home from the job I was working to where we were living. I had no radio. I only had my thoughts and my voice. Even now I am shying away but bear with me. I did not know then what my voice was trying to tell me, nor do I know now, all I knew was that I had to make it be quiet. So as I drove home, any time the voice would begin, I would shush it. Sing la la la la over and over until it was gone. I zoned my voice out, doing such a good job that now when I want to hear the voice, I am having difficulty getting passed the barrier I erected.
Every time I have had a situation that has altered the course of my life further from the dream that I had, there is violent reaction. Of drinking. Self-medicating any way that I can. Complete and utter disregard for the voice that is shrilly demanding my attention. Only to be shoved further into the abyss of my mind where I shove all the bad things that I do not want to touch with a 10 foot pole. I have already pin pointed a few occasions.
One when I was in my late 20’s and I went from living in the city, to moving to a city/town where I knew absolutely no one. Uprooting my entire life, leaving my brother and his family behind. Mom was moving to Mexico. I was not drinking heavily than, but I was taking pills.
Just prior to and after getting married. Than I drank excessively. So much so that M dumped all the booze down the drain. So I went back to my trusty pills.
When M found out that  I was capable of destroying our marriage so ruthlessly because he would not let me go. I want to clarify M was not abusive, he just felt that we were happy and did not want to face then that we were not. I tried to hold off but I began with the drugs and the alcohol again. I was drinking on the weekends, both Friday and Saturday night. And than it got progressively worse.
To this last year and a half. I have struggled with the alcohol and pills. I was drinking so much I am ashamed to even acknowledge it. And daily.
There is something that I am fighting. Or was fighting. There was a reason, many I am sure, as to why I have blanketed my mind. The only voice I hear right now, is the one that speaks as I write. Which might not be such a bad thing as T is up and ready for the day to begin. His new thing is for me to have him up at 6 a.m. I get my hour of silence from 5 a.m.-6 a.m.
As difficult as this is going to be for me, wow I say that a lot don’t I?, I am going to have to strip back the fog and peer at what I have hidden beneath.