I realized that there have been no feline updates in the last little while so I thought……..
Thomas returned to the vet’s yesterday.
He has lost 1.4 lbs which I thought was good but the vet felt that it might have been a little fast in the last month.
I am not feeding him a lot at once but several smaller meals throughout the day which is the way to go.
And even though I have cut his portions back he is eating less.
Not gorging.
Several small meals a day is not hard when I am off and a little trickier when I am working.
So for the foreseeable future I will be coming home on my half hours to feed both him and Loki.
What precipitated the vet visit is that I had noticed Thomas’ belly hanging down and it looked like there was liquid in there.
When both Tember and I touched it it felt liquidy.
Turns out that it is normal.
It is the fat pad.
It will go away although the skin will still hang down.
His energy levels are also starting to come back up as well.
He is playing with Loki.
Running around the house.
Cuddling.
Curling up in my lap.
He is happier.

As for the little monster.

The chin biting is becoming a thing of the past.
Not totally yet but getting close.
He is still a food bully…..
although I have discovered why…..
when he eats all the food on one side of the bowl he cannot/will not eat the other side until I turn the bowl.
So if I am not paying attention off he goes butting Thomas or Lucky out of the way.
Thomas walks off.
Lucky just looks at him and goes back to eating.
The little fiend has developed a taste for my plants.
Despite having a thing of cat grass to eat.

I discovered he had torn one little lone root out of my pot and was chasing the poor thing around the floor.
After catching him and removing the little guy which I put back in his pot I decided to search…..
How to keep cats/kittens from digging in plants.
River stones. Smooth. Where am I getting these?
Hang them up. No? Really? If I could I would.
Spray bottle. Not working.
Tin foil. Place over the soil and it will keep them from digging.
So I did.
And it has.
Loki looked at it and tried touching but did not like.
We will see if this really does help.
For now it looks like aliens have landed in my living room. 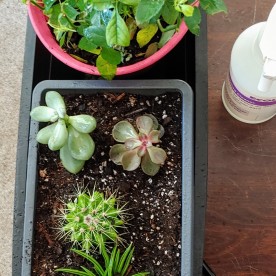 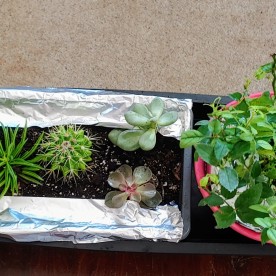 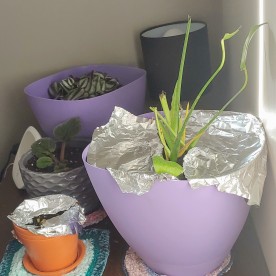