Loki is all mine.
He might go see Tember for a bit but he wants his mama.
Discovered that when he is streaking for the door it is not to escape but to try and keep me from leaving.
Loki attacks Tember for food and for getting too close to me.
Which has led to Tember calling him Little Lucifer.
Tember in Loki’s defense does pick the poor boy up and pretends to shoot butt bullets from his butt.
Including sound effects.
Gotta love my child.
While the covering of plants worked to keep Loki from digging it also meant that the soil was remaining wet.
Not drying.
Which meant the roots were getting soggy.
Which meant the plants were getting droopy.
But to uncover them meant Loki digging.
What is a kitten mama to do?
Sacrifice.
I had a plant that just was not doing well.
More and more it was dying/rotting away so…….
I sifted the soil tearing and tossing the plant roots and leaves into the mixture.
I laid out newspaper on the floor.
And left the pot for Loki.
My main fear was he wanted to use the pots as a litter box.
This is not true. (Genuine excitement here)
He only wants to dig in it.
So with the loss of one plant I am sincerely hoping that my others will survive.
It is not as though I was really invested with that plant anyways it was a recent addition. 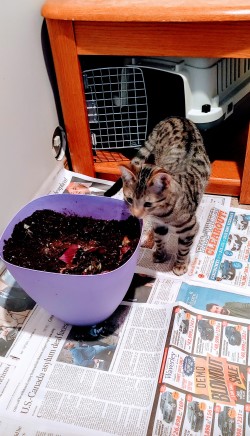 Lucky finally has climbed the cat tree.
Only when the other two are in another room.
Such as the bedroom or bathroom.
I caught her sitting like the pretty dame she is watching the leaves blow around outside. 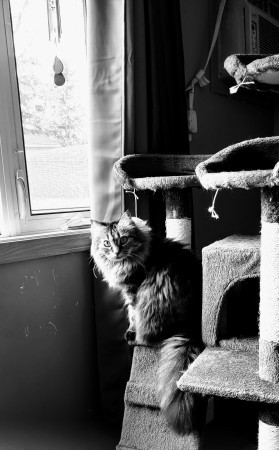 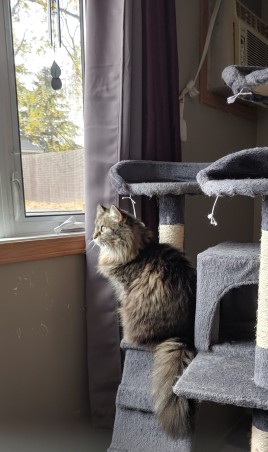 is losing weight.
And still receiving enough to eat as he is never crying for more food.
Granted he is also eating leftovers from Lucky and Loki but I am learning how much to put into each bowl.
Also they eat not once a day or even twice but small meals throughout the day.
Which is difficult with work but routine is settling.
Lucky is eating more and less if that makes sense at all.
I feed them only wet food which my Vet has said is best for them.
I agree completely.
Their fur is so silky soft.
Thomas has energy.
Playing with not only Loki but toys too.
Lucky as well is playing with Loki a bit.
I thought Loki was going to get a smack down today and I only wish I could have caught it on video.
Lucky and Thomas were in the bathroom watching me and waiting.
Excitement mom is on the move it is feeding time.
Loki suddenly leaps through the air legs splayed and lands on Lucky’s back like a wrestler. 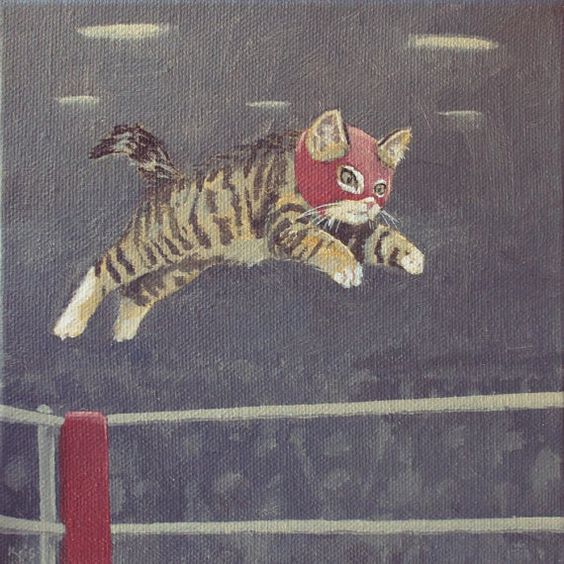 Immediately realizing who he landed on he flew off of her.
Lucky looked at him.
He is still alive.
Thomas looked like he was chortling inside. (He is missing an incisor on the top right and so his lip tucks in a bit. He looks like he is permanently smirking at me)
There is never a dull moment in this house with these three.
There is a nightly battle as to who sleeps where on me.
Head.
Chin/neck.
Hip/legs.
Can you guess who sleeps where?
Have a silly satisfying Sunday all.
It is Canadian Thanksgiving.
I am thankful for Tember/my mom/my health mental and physical.
I am thankful for all the friends I have who have become family to me.
I am thankful for all my blogger friends who appear every day in my life as though we were all meeting for coffee/tea/pop.
I am thankful for life.
For who I am.
For who I have become.
I am thankful.
©Oct. 11/20
Pictures are my own
Picture of wrestler kitty via Pinterest 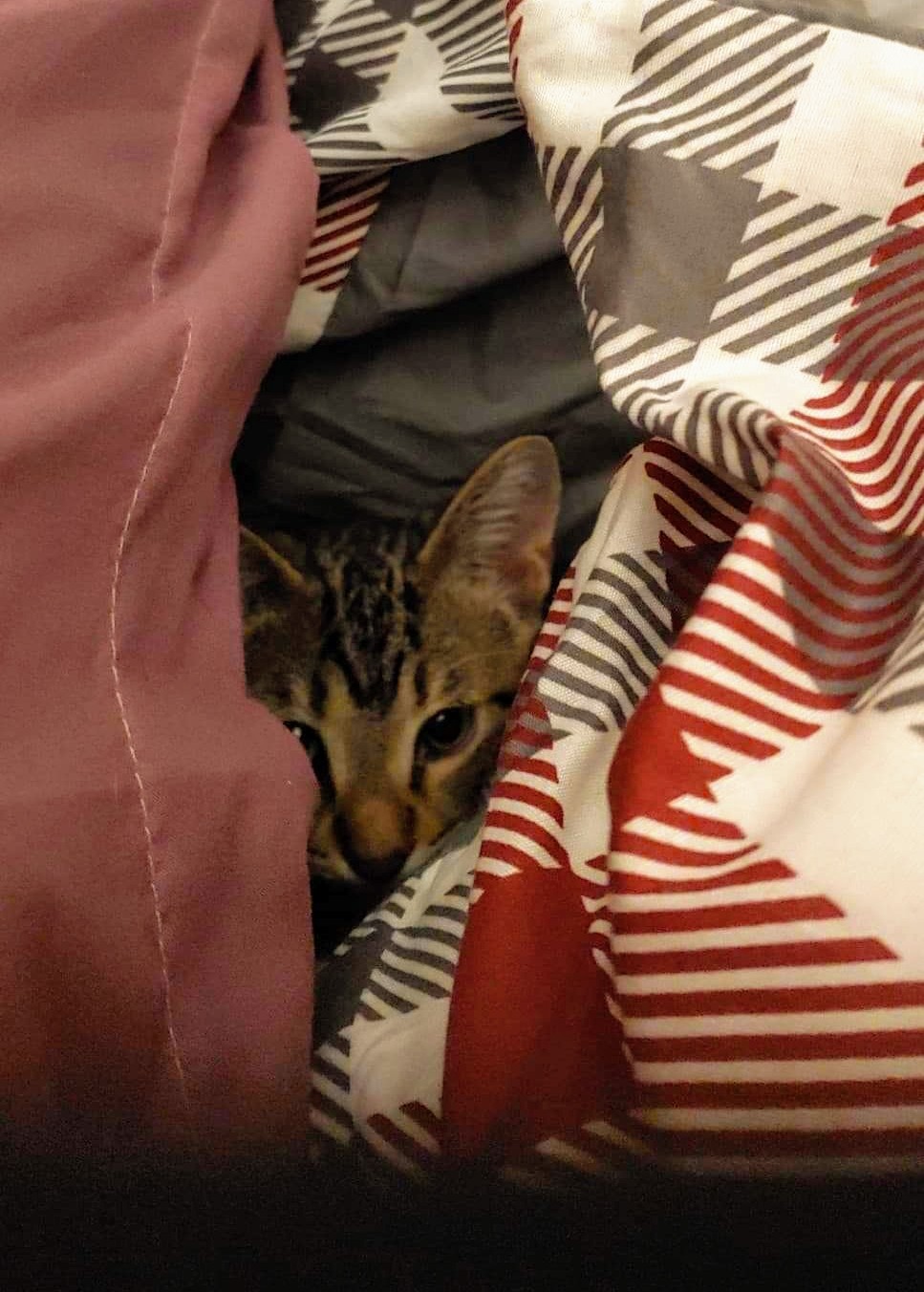 He strikes again.
Good thing that he is so dosh garn cute.
I speak here of Loki.
Although I mean Tember is cute too.
Loki has discovered he can sleep between mom’s pillows and no one can find him.
He is a bit of a pig at dinner time.
Pushing Lucky and Thomas from their bowls.
Although he is an equal opportunist and does let them eat from his.
I really have never had such a talkie cat ever.
And snuggles..
As people keep saying he adores me.
Suddenly will wake up and run over jump up on me and curl up on my chest.
My suddenly going back to work came as a shock.
Yesterday I got home from work and he chased me into bedroom headbutting against my legs.
Purring and chirping.
And he is going to get his way.
And his way only.
Loki loves to come in at various times of the night and get comfortable.
By that I mean he slithers under my chin and over my arms.
Liquid silk.
Slinky like.
Purring away.
Occasionally I receive a sharp nip to the nose or chin. Why? Do you speak kitten?
But on his terms.
This morning he woke me up at 4.
My alarm is set for 5.
I lay there and he got himself all comfy.
Was trying to figure out how with a window open and fan going I could still be hot when I realized
Thomas was pushed up against the side of me. Wow talk about double furnaces.
I must have dozed a little and when I woke up I grabbed my phone.
I knew I had to be close to getting up because I was feeling wakeful.
Checking the headlines and phone is close to my face as I have yet to put my glasses on.
Chirp.
Chirp.
Chirp.
Loki is making little chirping noises and grumbling.
He gets up and goes under the blanket.
And all I could think was payback’s a bitch ain’t it baby?
LOL only I would find it funny that I discovered waking Loki up is not as fun for him
as it is when he wakes me up.
I have said it before and I am still in awe of the difference: I have always had animals in my life but none that
have ever ‘chosen’ me. Loki did. And the difference in how they act is very noticeable.
Oh yeah……
I bought cat grass for them in an attempt to stop them from eating my plants.
This is five days growth. And they are loving it.

Have a great Wednesday Loves.
©Sept. 16/20
Pictures are my own

Learning Motherhood on the GO !!!

I'm a daughter, a sister, a wife and a mum but don't forget I'm me!